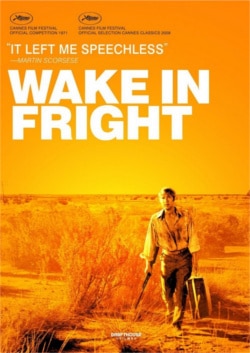 Wake In Fright
This week the gang is lucky enough to be joined by Britain’s own, “The Beef and Dairy Network Podcast” host, Ben Partridge. It’s a staff choice episode this week, and this time it’s April’s pick. She chose the 1971 Australian psychological thriller, Wake In Fright. The gang takes apart the film and what makes it so relevant to today’s society. Alonso even calls it “toxic masculinity, the movie.” The film can be a bit brutal and the crew makes sure to touch upon those elements, including the infamous kangaroo hunting scene. Plus, in celebration of having a beef expert on the show, the gang discusses eating meat in cinema. This segment is obviously titled “Weird Meat.”