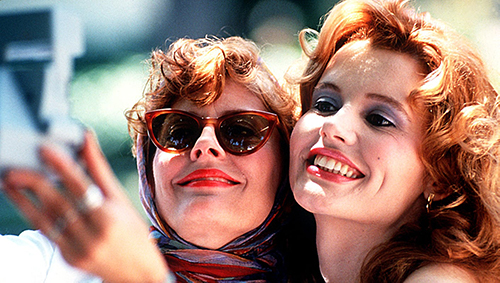 We have a very special episode this week. In conjunction with Geena Davis’ Bentonville Film Festival, we are discussing Thelma & Louise in celebration of the 30th anniversary of the film’s release. And we are joined by our good pal Katie Walsh as we drive off a cliff together in our proverbial Ford Thunderbird. Drea, who serves as film curator for the festival, takes us through some of the special movies that will be screening at the Bentonville Film Festival this year. And, to finish things off, we’ll have ‘Staff Picks.’

But, if you are interested in watching any of the movies at the Bentonville Film Festival (August 2nd – 8th), Maximum Film! listeners get a 50% discount by entering the code MAXFILM at the ticket portal found on bentonvillefilm.org.

In news, Sean Penn refuses to return to set unless everyone on production gets vaccinated and the director of the original Space Jam says the sequel is bad.

Liked Episode 204: The 30th Anniversary of ‘Thelma & Louise’ with Katie Walsh? Listen to these next...

Episode 262: ‘Honk for Jesus, Save Your Soul.’ with Angelique Jackson