This week, Tre’Vell and Jarrett are keeping things a bit light and talking controversial food opinions. But first they spill the tea and Pass the Popcorn over Joe Exotic and the peak White crazy of Tiger King.

NPR’s It’s Been A Minute host Sam Sanders joins the show to talk about chicken. Is a boneless wing considered a wing? Is it ever okay for Black folk to eat chicken in front of White PayPal? What if they’re doing it while singing an absolute banger about a crispy chicken sandwich?

We’ll chat about that controversial Mary J Blige commercial and unpack the shame and stereotypes behind chicken. Plus, Sam shares the history behind some of the racist tropes involving Black people and food. Turns out, the story behind Black people loving watermelon has its origins in Black liberation.

Before we go, it’s recently been reported that Black  people are disproportionately impacted by COVID – 19 and are dying at higher rates. If you’re looking for resources on how you can help from home, here’s a great place to start.

Articles Referenced on the Show 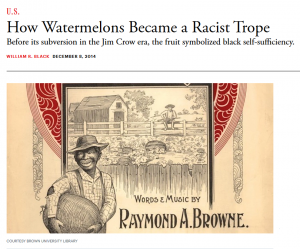 CodeSwitch: Where Did That Fried Chicken Stereotype Come From?

Sam – In dishonor of Mr. Whoever Runs Twitter Sam would like to shout out comedian Jaboukie Young-White who was recently suspended from Twitter for tweeting as Presidential hopeful Joe Biden.

Jarrett – Shout out to Shar Jossell for the lofi hip hop vibes on ChilledCow recommendation.

Tre’Vell – The P’s both Master and Tyler.