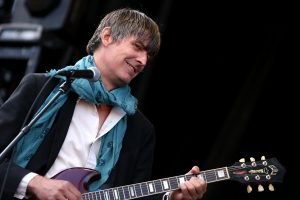 This time around, we’re joined by Stephen Malkmus, the former frontman of Pavement.

The band’s been called one of the best acts from the ’90s. They recorded so many songs that capture the decade perfectly: Cut Your Hair. Range Life. Stereo.

His latest is called “Traditional Techniques.” On that record, Stephen offers his take on folk music. There’s a little bit of Joni Mitchell, a little Loudon Wainwright, maybe some Incredible String Band, too.

He didn’t talk about any of those bands. Instead, he threw us kind of a curveball. Stephen Malkmus explains why “Love Will Keep Us Together” by Captain & Tenille changed his life.

Liked Stephen Malkmus on the song that changed his life? Listen to these next...