This week on The Sound of Young America, we rediscover our sense of wonder. 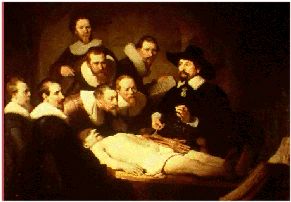 Lawrence Weschler spent over 20 years writing for The New Yorker, often profiling the sorts of empassioned eccentrics who change the world. His new book, “Everything That Rises: A Book of Convergences,” examines the surprising overlaps in the world, and particularly in visual culture, as well as the meaning of those overlaps. (Seen to the left: Rembrandt’s “The Anatomy Lesson” and Freddy Alborta’s “The Death of Che”)

Michael Ivins is the bassist (and more) of The Flaming Lips, a remarkable rock band who are perhaps more popular today than at any other point in their 20+ year history. Their sonic experimentation and melancholic comic touch are well known in the indie rock world, and so are their wild stage shows, which often include people in rabbit suits and members of the band rolling over the crowd in a giant hamster ball.

Incidental Music by DJW
Subscribe in iTunes
Donate to the Show