This week’s Sound of Young America returns to familiar territory — pranks and put-ons. We visit with a couple of old friends of the show who are geniuses of the field.

Our first guest is Matt Walsh. Matt’s probably best known for being a founder of the Upright Citizens’ Brigade. He was also a correspondent on The Daily Show, and has been seen in films like “Old School.” His new series on Comedy Central, Dog Bites Man, is a hybrid of many genres. It follows a fictitious Spokane TV news team through real-life America. They interview real people while playing out a fictional storyline. They’ve gone to the Southern Republican convention and to a KKK picnic. The show was created by Dan Mazer, the co-creator of Da Ali G Show.

We also talk with Charlie Todd, the creator of a group called Improv Everywhere. Charlie’s group stages massive street pranks in New York City, but they eschew pranks with victims. Instead, they focus on creating amazing experiences for ordinary people, and then dissapear — without revealing their identity. 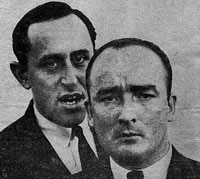 Also, we hear a street prank from Coyle & Sharpe, a remarkable pair of put-on artists who hosted a local AM radio show in San Francisco in the mid 1960s. Mal Sharpe was a comedian and radio man; James Coyle was a professional con artist. Together, they created some of the most amazing street pranks in history. We hear “Maniacs in a Living Hell” from their amazing CD “Coyle & Sharpe: Audio Visionaries.” (Buy It)

Also: as part of our continuing partnership with Sketchfest NYC, we hear a brief sketch from Portland-based sketch group The Third Floor.


Incidental Music by DJW
Subscribe in iTunes
Donate to the Show