Last month, The Sound of Young America recorded two broadcasts live at the PIT in New York City. This is the second of those programs.

Our first guest, Andres du Bouchet, is an accomplished stand-up comic whose show “Giant Tuesday Night of Amazing Inventions and Also There Is A Game” is a New York City favorite. He’s also been on Conan O’Brien and Cheap Seats, and was a featured player on I Love the 30s. He offered our listeners “So You’ve Been Turned,” a guide to acclimating to your new life as a vampire. 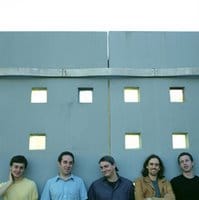 Our second guests, Elephant Larry, are a long-time Sound of Young America favorite. Their sketch parodied “8 Mile,” and it’s worth noting that they all wore funny sea-faring hats.

Then our relatively new friend Jonathan Coulton came through and performed three winning songs. First he played, “The Future

We closed with an interview with Kurt Andersen. Before Kurt became a novelist and the host of Public Radio International’s excellent Studio 360, he founded the seminal satirical magazine Spy. The magazine’s business was mocking the media, financial and Hollywood elite in an era before such irreverence was ubiquitous.

Special thanks to The Onion for promotional support