This week’s Sound of Young America broadcast looks at a few of our favorite goofs with the theme “Goofaround Gang.”

We first hear from comedian Will Franken. Will performs a unique form of solo theater comedy — essentially performing comedy sketches by himself. He’s been voted the best comedian in San Francisco by the SF Weekly, and the “Best Alternative to Pyschadelic Drugs” by the SF Bay Guardian. Will talks about his future, and performs a sketch. Be sure to check below for a “too hot for the radio” sketch from Will.

Our second guest is comedian Paul F. Tompkins. These days, Paul is best known as a VH1 “Fundit,” but he’s also been a regular on TV series including “Mr. Show,” “The Daily Show,” and “Real Time with Bill Maher.” We talk with Paul about his career in funditry, and about his sideline hosting a cult-favorite stage variety show in Los Angeles. 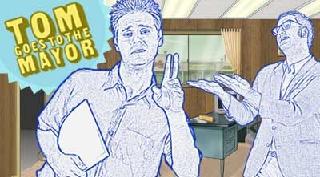 Our final guests are Tim & Eric, the creators of the Cartoon Network [adult swim] series “Tom Goes to the Mayor.” The series is a silly and incisive look at the tiny banalities of American life. They also provide a live demonstration of a favorite musical instrument.

Bonus… here’s the “Department of Special Projects” short T&E talk about on the show:

Incidental Music by DJW
Subscribe in iTunes
Donate to the Show