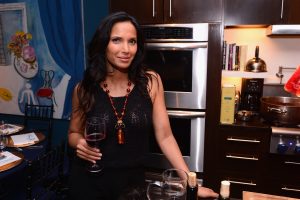 Padma Lakshmi on her childhood in India, Top Chef, and The Encyclopedia of Herbs & Spices
Padma Lakshmi is a model, actress and the host of Top Chef on Bravo. She’s the person telling everyone to pack their knives and go home.

Her latest television series is Taste the Nation With Padma Lakshmi on Hulu.

Each episode, Padma travels to a different part of the United States to highlight an immigrant community. She breaks bread with folks across the nation to discuss the relationships between history and food.

The show celebrates different cultures and their place in American cuisine. The results of the conversations she has often reveal stories that challenge notions of identity, and what it means to be American.

Padma’s also written several cookbooks, and a memoir. When Jesse spoke to Padma in 2016, she’d just written The Encyclopedia of Spices and Herbs. Jesse and Padma discussed cultural differences she had to reckon with growing up between India and the United States, and her role on Top Chef.

Liked Padma Lakshmi? Listen to these next...

Laura Jane Grace on going solo, Against Me!, and more

Cristin Milioti on ‘Palm Springs,’ ‘How I Met Your Mother,’ ’30 Rock’ and more