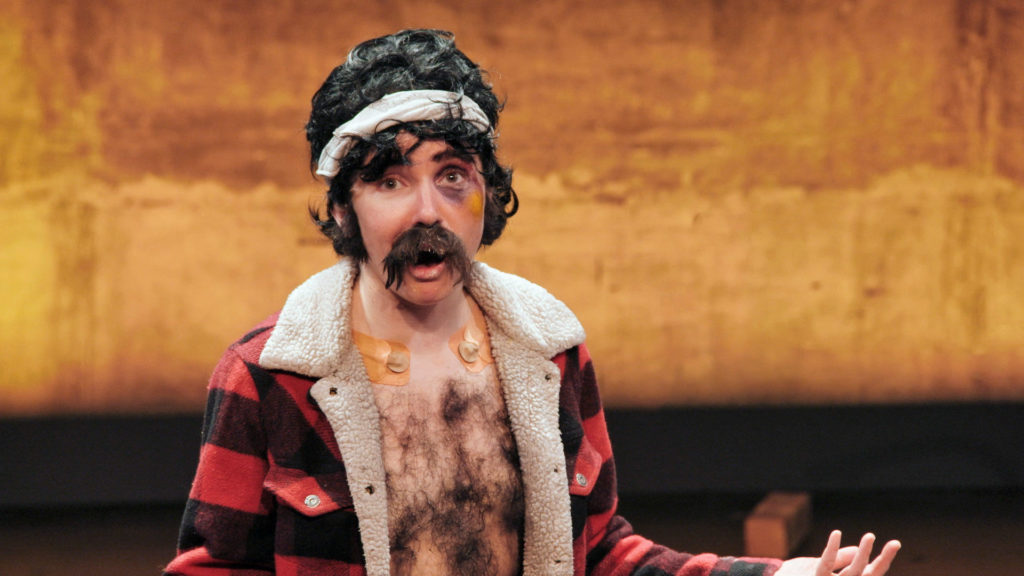 Natalie Palamides on her new comedy special, Nate: A One Man Show

Reviews of comedian Natalie Palamides’ work usually all include the same descriptor: brave. It’s easy to see why. Her newest comedy special, Nate: A One Man Show is a show unlike most hour long comedy specials. Mostly in that it’s not exactly stand-up. Nate is more like an hour-long, interactive, improvisation piece.

At the beginning of the show we meet Nate, a hyper-masculine, adrenaline fueled, protein powder enthusiast. Nate is man’s man. He has a black eye, a giant handlebar mustache, a bandana over his head, and he’s wearing a fleece plaid jacket open, with no shirt on underneath, chest hair exposed. After his brash stage entrance, Nate, played by Natalie in drag, begins to tell the audience about learning to express himself after a tough break-up.

He makes the audience laugh, then he makes them uncomfortable. At one point, he wrestles a stranger, at another, he improvises a handshake with them. Consent is an ever-present theme and between the moments of comedy there are moments of silence, awkwardness and discomfort that are palpable.  All the while his alpha male exterior is slowly evolving, psychologically and physically. It’s an incredible piece.

Natalie and guest host Carrie Poppy talk about Nate: A One Man Show, what Natalie’s parents think of her raunchy stand-up, and making the choice to commit to your art over commercial projects. Plus, Natalie tells us about the occupational hazards of wrestling random audience members on stage. That’s on the next Bullseye!

Nate: A One Man Show is currently available to watch on Netflix.

Liked Natalie Palamides creator and star of “Nate: A One Man Show”? Listen to these next...