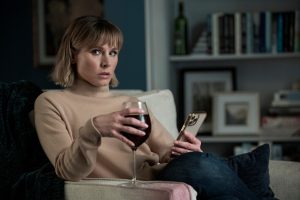 Kristen Bell is the star of a new series called The Woman in the House Across the Street From the Girl in the Window. She plays the character of Anna in the show, a woman who lives in an upscale suburb and is having a rough go of it lately. Her young daughter has died tragically, her husband left her, and she does not really work. Anna doesn’t do much other than drink lots of red wine and stare out her window from a comfy looking chair. That is until one day when she witnesses a horrific crime across the street, or at least she thinks she does.

The series is a pastiche and parody of a very specific type of movie or TV show. Maybe you have seen them on Lifetime or Netflix or maybe you have heard a version of it on a true crime podcast. Some call them domestic thrillers. What makes this show work though is its tone. It is not a gag-a-minute spoof, but rather a quiet, deadpan genre work.

Interviewing Kristen this episode is Helen Zaltzman. Helen is the host of The Allusionist, a podcast about language, linguistics, and why we speak the way we do. She is also the host of the podcast Veronica Mars Investigations, which recapped Kristen Bell’s breakthrough show of the same name.

Helen talks with Kristen Bell about the new show and what it was like not only starring in it, but also to produce it. Kristen also talks about some of the extreme things Veronica Mars fans have done in the past to get the show renewed. Plus, she shares the name she preferred to go by when she was growing up.

The Woman in the House Across the Street From the Girl in The Window is streaming right now on Netflix.

Liked Kristen Bell? Listen to these next...