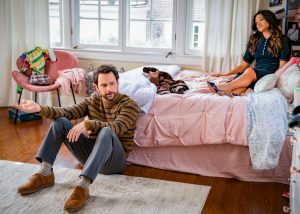 Charlie Day is the star and co-creator of It’s Always Sunny in Philadelphia. You probably knew that already, because Always Sunny is the longest running live-action comedy in the history of television. A person born during the show’s first season back in 2005 can get a driver’s license now.

And… It’s still good! The show’s main characters – Charlie, Mac, Dennis, Dee and Frank – are still immoral, self-sabotaging doofuses, and our lives are all the richer for it.

But Charlie Day, the actor, is more than Charlie from Always Sunny. He helped co-create the very funny TV show Mythic Quest. He’s acted in movies like Pacific Rim, Horrible Bosses, The Lego Movie – and now, the romantic comedy I Want You Back, where he plays Peter, one of the leads.

In a typical romcom, you’d probably have guessed the next move here: Emma and Peter fall in and out of love but eventually realize they’re meant to be together.

In I Want You Back, though, they conspire.

Peter and Emma develop a plan to win back their exes the only way they know how: sabotaging their new relationships. It’s like Strangers on a Train, but instead of murder, it’s emotional warfare.

We’ll talk with Charlie about the movie and playing zany characters – plus, he’s started rewatching Always Sunny episodes he hasn’t seen in over a decade! He tells us what that’s like.

I Want You Back is out now, streaming on Amazon Prime. It’s Always Sunny in Philadelphia is on FXX.

Liked Charlie Day? Listen to these next...