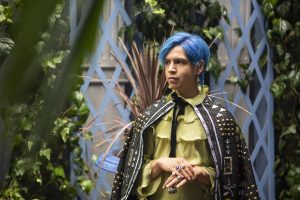 Julio Torres is a powerhouse. He’s a comedian, actor and former writer for Saturday Night Live.

Julio grew up in El Salvador, and spent his entire childhood there. He thought he’d end up as an architect, just like his mom. But even in El Salvador, he grew up on TV shows from the US. He was raised on the classic stuff – The Simpsons, I Dream of Jeanie, and Ally McBeal. He always kind of knew comedy was in his future.

When Julio made his way onto SNL, he brought some magic to the show. Unlike the show’s usual in-your-face humor, Julio’s sketches were dreamy and odd. He wrote the famed 2017 sketch that featured Ryan Gosling playing a man who’s haunted by the papyrus font used by the film Avatar. And of course, one of our all time favorites—Wells for Boys.

When we talked, he’d just released his first comedy special on HBO. It’s a little sideways from what you’d expect from an HBO comedy special. The premise is Julio talking about…his favorite shapes. It’s kind of surreal to watch, as he shares his favorite shapes with the audience. There’s a lot of glitter. And he imagines lives for these shapes – objects, really – that you’d never expect. But really, the shapes help us learn more about Julio.

Julio is also one of the creators of Los Espookys. It’s a wonderful TV comedy about a group of friends who turn their love of horror films into a business. They provide events and happenings for people who want to be scared. Think the gig economy for spooky events. In the show, Julio stars alongside Fred Armisen, Ana Fabrega, and more—it’s so good.

The show’s second and – tragically – final season aired late last year on HBO. It’s one of our favorites here at Bullseye, so we figured we’d send off Los Espookys by replaying our 2019 conversation with Julio.

This interview originally aired in August of 2019.

Liked Julio Torres on SNL, Los Espookys and more? Listen to these next...