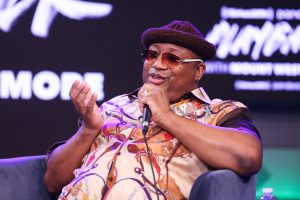 When it comes to Bay Area hip-hop, E-40 is one of the greatest of all time. He goes by many names including Forty Fonzarelli, Charlie Hustle, 40-Water or maybe you know him as the Ambassador of the Bay Area.

He was born and raised in the small town of Vallejo, and he has brought the culture of the Bay Area to the world. His distinctive style is overflowing with language, bars stuffed to the gills with words both real and imagined. He’s hip-hop’s king of slang and a stylist without peer.

When E-40 joined us on the show, he talked about what it was like growing up in the Bay Area and took us to the root of his passion for music. Plus, he talked about his college days at Grambling State University and participating in the school’s talent show.

A version of this interview first aired in July of 2019.