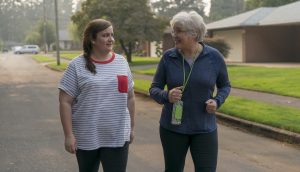 You probably know Julia Sweeney from her work on Saturday Night Live. She was on the show in the early 1990’s alongside castmates like Chris Rock, Dana Carvey and Chris Farley.

After SNL, she performed a series of autobiographical monologues discussing her life and relationship with religion in a really funny, honest way.

She took the stage show God Said “Ha!” on the road, and eventually had a short run on Broadway. Her other one woman shows include: In The Family Way, Letting Go of God, and Older and Wider.

These days, you can see her on Showtime’s Work in Progress. In it, she plays a fictionalized version of herself who has to answer for the damage done by one of her most well known SNL characters: Pat.

You can also catch her on the Hulu comedy Shrill. Julia plays Vera, mother to main character Annie, played by Aidy Bryant.

Annie is a writer living in Portland who’s constantly juggling insecurities in her love life, job and family. The show also talks a lot about body image issues. And how family, especially our parents can sometimes exacerbate those feelings.

Guest host Carrie Poppy chats with Julia about her work on stage. Plus, her complicated relationship with SNL‘s Pat and how they fit into Work in Progress. We also get into the type of mother she is in real life in relation to her character on Shrill.

Liked Julia Sweeney on “SNL,” “Work in Progress,” “Shrill” and more? Listen to these next...