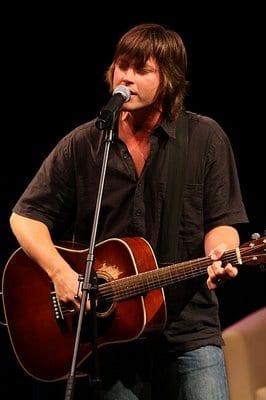 Last month we were live at the Bumbershoot Music & Arts Festival in Seattle. Our shows included three fantastic music performances — Jonathan Coulton, PWRFL Power and Rhett Miller of the Old 97s (above). In addition to the podcast version of this show, you can download individual songs from the direct links included below.

Jonathan Coulton is the internet’s leading serio-comic troubador. He’s blazed a trail for independent musicians everywhere, blending comedy with subtle character studies. In 2006, we interviewed Coulton on The Sound of Young America. Later that year, Coulton performed as part of our Live in New York show.

PWRFL Power is Kaz Nomura, a classical guitar virtuoso and indie pop stylist. He rocketed to the top of the Seattle Music scene over the last two years with sweet, simple songs backed by sometimes baroque guitar lines. He recently self-released a self-titled LP.

Rhett Miller jumped out of an airplane and onto our stage at Bumbershoot. He’s best known as the frontman of the country-rock band The Old 97s, and has also released music under his own name. He rocked our crowd with two Old 97s classics. (Special note: please excuse the awkward mix on Dance With Me, we had a verse worth of trouble with the house sound system).

Listen to This Week’s Show Online

Discuss this episode on the forum!
Subscribe in iTunes
Please Donate to Support the Show