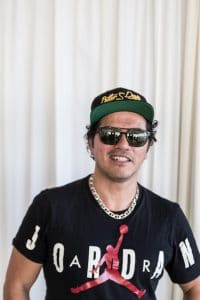 John Leguizamo is a super-famous actor who’s been in well over 100 movies and TV shows. You probably know him from his work in films such as Carlito’s Way, The Pest, To Wong Foo, Thanks for Everything! Julie Newmar and the Ice Age franchise of movies.

His resume is impressive enough but John’s also a writer whose created and starred in a handful of powerful, hilarious one-man shows over his career.

There was his debut production titled, Mambo Mouth, in which he played a total of seven different characters on the stage — compiled and composited from people in his past. They’re all deeply personal. Touching and hilarious, too: Leguizamo finds a way to talk about himself and the people in his life – sometimes channel those people – with a remarkably sensitive touch.

John’s latest show is called Latin History for Morons. The title kind of explains the show’s conceit: with a chalkboard and a professor-y looking suit, Leguizamo gives the audience a history of the Americas that you don’t always see in textbooks: stories of oppression, exploitation, disease and war.
But, since it’s John Leguizamo… there are dozens of funny voices, recreations of historical figures long-since dead. And it all begins with a story about Leguizamo’s life: a few years back, his son was bullied over his latinx heritage at school. Leguizamo wanted to do something about it. Give him something to be proud of.

Latin History for Morons is streaming now on Netflix.

You can get tickets for the live show on Broadway here.

Catch John in the flick Playing with Fire in theaters
November 8.

Liked John Leguizamo? Listen to these next...

Zach Woods of Avenue 5, Downhill, The Office and more