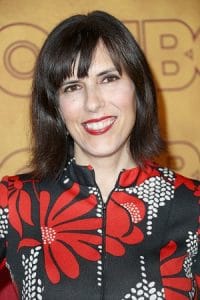 Actor, comedian Edi Patterson got her start in improv. She’s a veteran of the Groundlings sketch group and we can not stress this to you enough: she is super funny.

Edi’s past television work includes roles on Californication, Partners and Black-ish. One of her most memorable roles was in Danny McBride’s dark comedy Vice Principals where she played a jilted and emotionally unstable past lover of McBride’s Neal Gamby.

She currently co stars alongside McBride, John Goodman, Walton Goggins and Adam Devine on HBO’s The Righteous Gemstones where she plays the hilarious Judy Gemstone. The show is about the Gemstone family. They’re pastors and owners of a massive megachurch with hundreds of thousands of followers. Think Jim and Tammy Faye Bakker. The family centers around Dr. Eli Gemstone, the patriarch, who’s been preaching on TV for decades. He’s played by John Goodman. But the *show* centers around Eli’s kids.Their power struggles, their scheming, their scandals and their hamfisted attempts to curry favor with their father.

On a show filled with some of the most talented people in comedy, Judy Gemstone is easily the funniest character on this show. She’s got this kind of manic energy – she alternates between total confidence in everything she does to massive, crippling insecurities. She doesn’t have much filter and she has a very, very short temper.

She steals every scene she’s in.

Edi talks to Bullseye about reuniting with her Vice Principals costar, about her experience with televangelists and her love of horror films. Edi’s a real horror buff!

Plus, we’ll talk about “Misbehavin'” the catchy as heck Christian county tune she sings and helped write for the series.

HBO has renewed The Righteous Gemstones for season two. We can’t wait to find out what Edi and the rest of the cast and crew have in store!

You can stream Season 1 on HBO.

Liked Edi Patterson? Listen to these next...