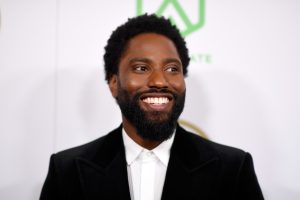 John played football in high school. He was really good at it and went on to play in college, and even played professionally for a few years. It seems fitting, then, that when he took up acting, his breakthrough role was the portrayal of an NFL player on HBO’s Ballers. It was familiar enough territory for him, and John was great in it.

John has since gone onto play a bunch of other big parts since Ballers. This includes the lead role in Christopher Nolan’s action movie Tenet, the romantic drama Malcolm and Marie and the brand new mystery comedy Amsterdam, which just hit theaters.

When John David Washington joined Bullseye in 2019, he’d just been reunited with Spike Lee, the first director he ever worked with. He starred in Lee’s Academy Award-winning BlacKkKlansman. John played Ron Stallworth, the first Black detective to join the ranks of the Colorado Springs Police Department.

In the film, Stallworth infiltrates a local chapter of the KKK over the phone, doing so with the help of a white police officer, who stands in for him in person. It’s a harrowing, hilarious and – at times – hard to believe movie. But much of it is based on a true story.

This episode originally aired in February of 2019.

Liked John David Washington on Ballers, BlacKkKlansman and more? Listen to these next...