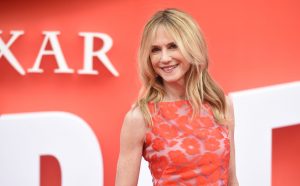 Holly Hunter on her long career in film, and the new TV show Mr. Mayor
Holly Hunter’s had unforgettable roles in some of the best movies of the last 30 years. She’s been nominated for several Academy Awards for her roles in films like Thirteen, The Firm, and Broadcast News.

Her role in 1993’s The Piano earned her an Academy Award. She starred in O Brother, Where Art Thou? and Raising Arizona – two Coen Brothers classics.

These days, Holly’s starring on a TV show called Mr. Mayor. The new sitcom created was by Tina Fey and Robert Carlock. The show follows the life of retired businessman Neil Bremer, portrayed by Ted Danson. He becomes Mayor of Los Angeles on a whim.

As you might come to expect from Holly’s characters Arpi doesn’t fool around. She knows what she wants, and how to get it. By the end of the first episode she becomes deputy mayor, and starts pulling all the strings at city hall.

Holly’s one of the most talented actors in the game, and we’re thrilled to share this conversation.

We talk about the new sitcom Mr. Mayor. Plus, we’ll dive into her portrayal of Jane Craig in Broadcast News. She’ll also throw us back to the time she had just moved to New York City and was roommates with Jason Alexander, long before they had their breaks in showbiz.

Liked Holly Hunter? Listen to these next...