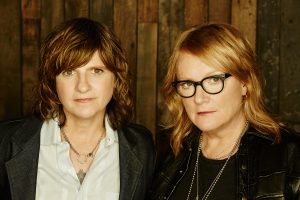 They’re the duo behind the songs Closer to Fine, Galileo, The Power of Two, and so many other darling folk rock classics.

They have been writing, arranging and performing together since high school. They’re know for their quiet, beautiful melodies, usually using pretty simple arrangements: an acoustic guitar, maybe a mandolin or electric guitar added for flourish.

Amy and Emily have been out as lesbians pretty much their entire career, and they spoke out for LGBTQ rights at a time when that could have major consequences on a performer’s career. They’ve long been activists with indigenous communities, particularly with regard to environmental issues. And those themes come up in their music, too.

Guest host Linda Holmes chats with Amy and Emily about the new record. We’ll get a taste of some tracks off the record. What it’s like to parent during quarantine. Plus, we chat about their eclectic taste in music. Find out which Indigo Girl is listening to Young Thug these days! All that and more on the latest episode.

You can also check out this interview on our YouTube channel.

Liked Indigo Girls? Listen to these next...