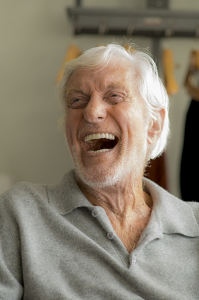 Dick Van Dyke has been entertaining the public for over 70 years.

He’s a legend of stage and screen – The Dick Van Dyke Show, Mary Poppins, Bye Bye Birdie and so many more… and he’s still performing today.

He turned 95 this month. We’re taking a moment to celebrate his career by revisiting our interview with him from 2015.

When he joined us he had just written a book called Keep Moving: And Other Tips and Truths About Aging. It’s a motto he still follows – he sings and dances every day. He goes to the grocery store and says hi to Debbie, his favorite cashier. He’ll even sing a song or two on stage every now and then.

Dick Van Dyke talked about being a comedy legend and of course, we dove into his legacy working on some of the most iconic roles in entertainment. Plus, life before working on television and finding his footing during the dawn of television.

Liked Dick Van Dyke? Listen to these next...