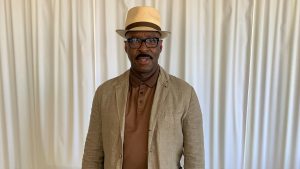 Courtney B. Vance on 61st Street, Fences, and more

Courtney B. Vance started acting in college. He went to Yale drama school, where he met his future wife Angela Bassett. He starred in the debut performance of August Wilson’s Fences, first at the Yale repertory theater in 1985, then later on Broadway in 1987. He performed the part of Cory in the play, opposite James Earl Jones as Troy, and it earned him a Tony nomination.

Vance has gone on to work on the big and small screen, too. For several seasons he played Assistant D.A. Ron Carver on Law and Order: Criminal Intent. He also had great parts in military films like Hunt for Red October and Hamburger Hill.

But it was not until the 2010s that his career trajectory really changed. He was cast as Johnny Cochrane in the TV miniseries The People v. O.J. Simpson.

It is a part that, in the hands of other actors, could easily become cartoonish and big. However, Vance’s Cochrane was nuanced, complex and very good at public speaking.

To the surprise of pretty much no one, Vance won an Emmy for his performance. The part opened the door to even more roles including parts in Lovecraft Country, Genius: Aretha, and a new project called 61st Street.

The show, which Vance also executive produced, follows a Black teenager named Moses. He is a promising high school track star who becomes the prime suspect in a case that left a police officer dead. Vance plays the part of Franklin Roberts in the show, a public defender who takes up Moses’ case.

Courtney B. Vance joins the show to talk about his acting career on both the stage and the screen. He also talks about what it was like taking on the role of a lawyer again the new series 61st Street. Plus, he talks with us about what it was like working alongside the legendary James Earl Jones in August Wilson’s iconic play Fences.

Liked Courtney B. Vance? Listen to these next...