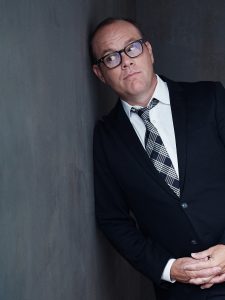 Tom Papa is a busy man. In addition to publishing his second book, You’re Doing Great! And Other Reasons To Stay Alive, he co-hosts the radio show What a Joke with Papa and Fortune on Sirius XM, hosts the podcast Come To Papa, is a frequent panelist on NPR’s Wait Wait Don’t Tell Me and is also a writer and performer on Live From Here — formerly, A Prairie Home Companion.

Thankfully, even with such a full schedule, he found the time to gift us with his new comedy special on Netflix, You’re Doing Great! This special is signature Tom Papa. It’s a hilarious and surprisingly warm and encouraging take on the pressures of modern life. In it, Tom talks about everything from the highs and lows of marriage and parenting to the futility of diets to the fantasy of abandoning suburban life for the freedom of his teenage dreams. There’s a lot of pressure to be better than the next guy on social media and Tom expertly explains how chasing that goal is why so many people are convinced that they’re failing at life. Although, mostly his message is about how we should all be a little easier on ourselves. That comedic approach — choosing positivity– is a pretty rare find in stand-up, but Tom says that’s just who he is. It has helped him carve out and claim a unique space among his generation of comics that has served him well over the years.

This week Tom joins Bullseye to talk about his new comedy special, his comedic influences, and why he has always been comfortable with being “kinda lame” and how he learned resilience from his Nana. That’s all on the next Bullseye!

You can pre-order Tom’s new book, You’re Doing Great!: And Other Reasons To Stay Alive, and find links to his other work on his website.

Liked Comedian Tom Papa? Listen to these next...

The Song That Changed My Life: Doc Severinsen