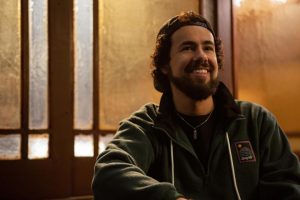 Ramy Youssef on Hulu’s”Ramy”
When comedian and actor Ramy Youssef had the chance to make a TV show, he knew he wanted to write what he knew: his family, his childhood, his hometown.

Hulu’s Ramy follows the life of a young Arab Muslim man living in New Jersey – much like Youssef’s personal experience.

At different times, Ramy wonders what to do about his career, his love life and his family life. All stuff that’s pretty typical for a millennial of his age.

One of the things that makes the show Ramy unique is how it talks about faith.

Ramy, the character, is a practicing Muslim. He prays. He goes to a mosque. He doesn’t drink. Amid the millennial existential angst and jokes about sex, the show also asks some probing, deep questions about faith.

It’s a show that explores complex themes in an engaging way. And it’s as compelling as it is funny.

Recently, Ramy was nominated for three Emmys: best directing in a comedy, best supporting actor from the great Mahershala Ali, and best actor for Ramy Youssef.

Jordan Morris, in for Jesse, talks with Ramy Youssef about the Emmy-nominated show, and his own journey through faith. Plus, how self-deprecating humor has helped him collaborate with actors when working on the show.

The show has been picked up for a third season. The first two seasons of Ramy are streaming on Hulu now.

Liked Comedian Ramy Youssef on Emmy-nominated “Ramy”? Listen to these next...