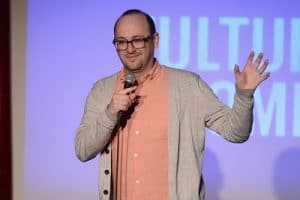 BROOKLYN, NY – MAY 20: Josh Gondelman performs onstage during the Vulture Festival presented by AT&T – Comedy Show at The Bell House on May 20, 2018 in Brooklyn, New York. (Photo by Andrew Toth/Getty Images for Vulture Festival)

If you mention comedian Josh Gondelman’s name to his peers in the comedy world, their first reaction is usually: “Oh! Josh Gondelman. Nice guy.”

And they’re not wrong.

But Josh is much more than just a “Nice guy.” He’s incisive. He’s also a brilliant writer.

He’s got several stand-up albums under his belt, including this year’s hilarious Dancing on a Weeknight.

Josh has a new book out called Nice Try: Stories of Best Intentions and Mixed Results. It includes a collection of personal essays about the value and drawbacks of being a nice person. Its self-deprecating. It’s honest. It’s very very funny.

Josh Gondelman joins us to talk about his stand-up career. He’ll chat about realizing the difference between being a nice person and being a good person, tweeting out millennial Seinfeld references and crafting the perfect roast joke. Trust us, it’s a good one! Plus, we’ll talk about intent versus impact in the world of comedy.

Pick up Nice Try: Stories of Best Intentions and Mixed Results  online or in major bookstores.

Check out Dancing on a Weeknight online.

You can catch all-new episodes of Desus and Mero on Showtime.

Liked Comedian Josh Gondelman? Listen to these next...