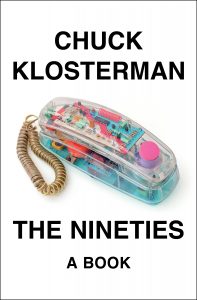 His 2003 essay collection, Sex, Drugs, and Cocoa Puffs, made a bunch of top ten lists when it came out. And he’s since positioned himself as a writer who doesn’t just think about pop culture, but has a knack for unearthing common threads in disparate things – like The Chicks and Van Halen, for example. And in doing that, you, the reader, get a deeper understanding of both.

His newest book is called The Nineties. And we know what you’re probably thinking when we talk about a book called The Nineties and an author like Chuck Klosterman – maybe it’s a celebration of some lesser known Sting records, a postmodern reevaluation of Ghost World, or… 10,000 words on the problematic nature of Home Improvement and how it paved the way for nu-metal. Or something.

The Nineties isn’t that.

In the book, Klosterman chronicles the last decade of the 20th century. He does so not as a cultural critic, but more as a historian, or a philosopher. He takes a decade that many of its readers experienced, and thinks not about the nostalgia of the events back then, but their consequences, what mattered, what didn’t.

So, buckle in for a trip down memory lane!

Liked Chuck Klosterman on “The Nineties”? Listen to these next...