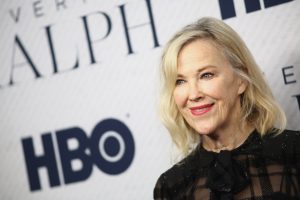 Catherine O’Hara on Being Slightly, Perfectly Odd
Catherine O’Hara is a comedy legend. Her work embodies a particularly special brand of comic absurdity. She helped launch SCTV alongside other burgeoning comedy greats like John Candy and Eugene Levy.

She went on to star in some huge blockbuster comedies. She became spiritually possessed in Beetlejuice. She played a memorable, anxiety-ridden mother to Macaulay Culkin in Home Alone, and became a critical part of Christopher Guest’s ensemble mockumentaries, like Waiting for Guffman and Best in Show. Some other recent favorites include HBO’s critically-acclaimed biopic Temple Grandin and Tim Burton’s Frankenweenie.

At the Emmy Awards a few weeks ago Schitt’s Creek swept the comedy category. Catherine won a much-deserved Emmy for her lead role on the show.

Schitt’s Creek follows a wealthy family, the Roses, who are forced to relocate to a tiny, rural town after losing their entire fortune. For all of its six seasons, Catherine played Moira Rose, mother to David and Alexis, wife to Johnny Rose, played by Eugene Levy.

We’re taking a moment to celebrate her Emmy win by revisiting our conversation from 2013. When Catherine joined us she talked to us about the difficulties of being a woman in the SCTV writers’ room. Plus, creating memorable characters with her longtime friend and collaborator Eugene Levy, and her own secret comedic formula.

Liked Catherine O’Hara? Listen to these next...