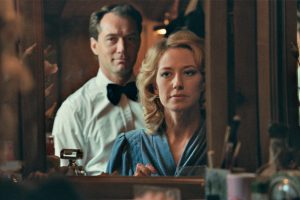 Carrie Coon on The Nest, and the acting roles she’s still waiting for
Carrie Coon is an actor best known for her roles on TV.

You’ve seen her as Nora on HBO’s The Leftovers.

The Leftovers explored grief and loss in the aftermath of an event in which two percent of the world’s population suddenly vanished.

It was a show with complex themes and compelling characters. No one was as fearless and bold as Nora. She was angry and kind of tightly wound, traumatized by the loss of her entire family.

In Season 3 of Fargo, Carrie played Police Chief Gloria Burgle: brave in the face of danger, but also baffled at humanity’s capacity to be so violent and cruel.

In her latest role, she’s starring on the big screen in The Nest.

In the film, Carrie plays Allison. Allison is married to Rory, who is played by Jude Law. Together, they and their two kids move from Upstate New York to an estate outside London, where Rory grew up.

Once they relocate, the family begins to unravel. The isolation of their new home takes a toll on the family. It’s not a horror film, but it’s intense – you can feel the pressure of the situation and the way all the relationships are being pushed to their breaking point.

Rory and Allison’s relationship was already in trouble, but this new cross-continental move escalates the situation.

Linda Holmes, the host of NPR’s Pop Culture Happy Hour, talked with Carrie Coon recently about The Nest. Plus, Carrie also discusses how she got into acting and she describes her wedding – which is perhaps the most unconventional ceremony you’ve ever heard.

The Nest is available to rent online now.

Liked Carrie Coon on ‘The Leftovers,’ ‘Fargo’ and ‘The Nest’? Listen to these next...