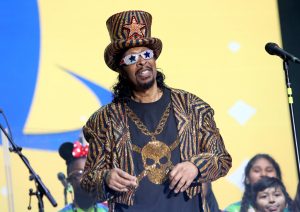 Bootsy Collins is a legend in the world of funk.

He’s a bassist who came to his instrument by happenstance. He was only in his teens when he was discovered and hired by the Godfather of Soul, James Brown, to be part of his backing band known as The J.B.’s.

He went on to play with another notoriously inventive funk artist, George Clinton, as part of Parliament and Funkadelic. He continued the funk with Bootsy’s Rubber Band and a number of other musical collaborations.

Bootsy helped create the revolution that was funk.

We’ll revisit our conversation from 2011. Bootsy talked with Jesse about his career as one of pop music’s greatest bass players, being on the forefront of funk and playing with James Brown. Plus, where’d he get those dope star glasses?

Bootsy’s latest release is a single called “Stars,” and it’s part of an effort to raise money for music industry folks affected by the pandemic. You can listen to the single here and support the cause by going to the MusiCares website.

Liked Bootsy Collins, Funk Legend? Listen to these next...