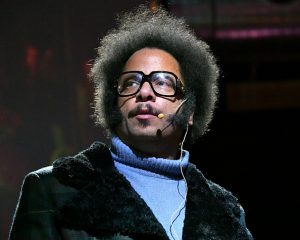 Boots Riley is a story teller. He carries a fire through his work in music and film that is intended to be built upon by others. Through his career as founding member of the hip hop group The Coup, he’s been able to paint pictures of his past, of the way he sees current world events and to shine a disinfecting light of truth on issues involving social justice, poverty and racism.

His interest in activism took shape in his formative years while he was growing up in Oakland, California. He joined the Progressive Labor Party when he was only 15! At only twenty years old, he founded the hip hop trio The Coup alongside his United Parcel Service coworker and buddy E-roc. The group was socio-political, clever and could be described as radical. As lead lyricist his words were provocative and challenged class structures, patriarchy and capitalism. The music was always very funky and had that classic Bay area cadence that evokes Too Short or E-40. The group, which later became a full-on band, shares a similar sense of consciousness as artists like Rage Against the Machine, Dead Prez and Tupac.

After nearly three decades of musical storytelling he made his directorial debut with the dark comedy Sorry to Bother You. It’s set in an alternate reality Detroit and stars LaKeith Stanfield who plays Cassius Green. Green is a young Black man who is dealing with underemployment in a post 2008 recession world. He finds a job as a telemarketer and upon following the advice of a fellow coworker, played by Danny Glover, finds success in the position by adopting a “white voice.” Green is later given a promotion and is soon forced to choose between his newfound upward mobility in a world that so rarely affords those types of opportunities to people of color or stand with the unionized workers.

The film challenges the efficacy of capitalism, questions wealth distribution and offers art as a form of activism against the status quo. It pulls from the sci-fi and horror genres in heaping handfuls while maintaining its measure as one of the funniest, most poignant and visually stunning films of 2018.

Bootsy returns to Bullseye to talk about Sorry to Bother You, trying to find his style early on as both an individual and as a band member and how the narrative style of his song “Fat Cats, Bigga Fish” inspired his film career. Plus, he’ll talk to us about how the very personal song “Underdog” helped him deal with the grief of losing a long-lost friend.

Sorry to Bother You is currently streaming on Hulu.

This interview originally aired in June of 2018.

Liked Boots Riley? Listen to these next...