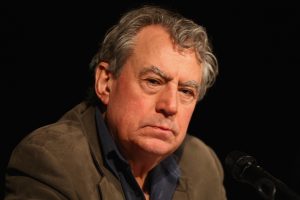 We lost an incredibly talented comic genius last week, Terry Jones. He died on January 21, in his home in Highgate, north London. Terry was 77.

Terry was also a well respected medieval historian – in fact, he wrote two books on poet Geoffrey Chaucer. Later in his career, he became a prolific children’s book author. His books were always a bit surreal, witty and charming.

He was a hero to many comedy nerds obsessed with Monty Python.

We’re taking a moment to remember Terry. When he joined Bullseye (then The Sound Of Young America) nearly 14 years ago he talked about his years with the Pythons. Plus, what it was like when he was given the opportunity to re-edit his cult classic The Saga of Erik the Viking.