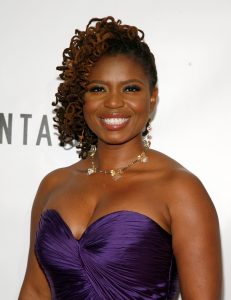 Her most acclaimed work, though, is The Mountaintop. It imagines Martin Luther King’s last night on earth at the Lorraine Motel. That play won the Laurence Olivier award for best new play in 2010.

These days, Katori Hall is the creator and showrunner of the new Starz show P-Valley. It’s based on a play of hers by the same name.

It’s set in a place called The Pynk – a strip club in the Mississippi Delta. The show focuses on the people who work in the club: the women on stage, the bouncers, the bartenders, and the boss: Uncle Clifford.

Guest host Tre’vell Anderson chats with Katori about the show and where it fits into the broad conversation of stripping and sex work. Plus, where she got the idea for the show and embracing the humanity of this often overlooked industry.

Liked Award-winning playwright Katori Hall on Starz’ “P-Valley”? Listen to these next...