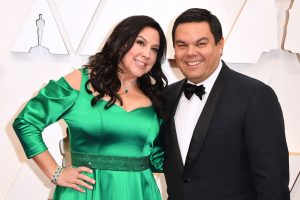 If you have a child or know a child or even if you’ve just been vaguely aware of what’s going on in the zeitgeist of kid culture there’s a strong chance you’ve heard the music of Kristen Anderson-Lopez and Robert Lopez. The husband and wife writing team are responsible for some of the best songs to come out of musical theater from the past two decades.

Kristen is a talented lyricist and songwriter who is the co-creator of the musical In Transit. Robert co-created The Book of Mormon and Avenue Q. Together the team went on to write the songs featured in 2013’s hit animated film Frozen including the hugely popular instant classic “Let it Go.”

Both New York natives, the pair fell in love with musical theater at a very young age. Robert started taking piano lessons at Greenwich House Music School at the age of six while future wife Kristen gained an appreciation for the stage by attending shows as early as four.

After dating for a while they decided to collaborate on their first project together—a song about a couple of clams from the Playhouse Disney television program Bear in the Big Blue House.

They’ve joined occupational forces several times over the course of their careers. The two wrote “Remember Me” from 2017’s Coco. For that song they won their second Oscar. They also returned to the Frozen franchise to write the music for the sequel aptly titled Frozen 2 and are currently nominated for another Oscar for their song “Into the Unknown.”

The Emmy, Grammy, Oscar and Tony-award winning duo joined Bullseye to share the story of how they first met as well as chat about how they draw inspiration for their song lyrics. Plus, they tell us what date night at the Oscars with their kids looks like. All that and more on the next Bullseye!

Frozen 2 is available to watch at home now.