If you read Annabelle’s op-ed in the New York Times about being diagnosed with lung cancer, you might be able to infer this year has been a bit much. So why would a friend recommend Annabelle watch the play We’re Gonna Die by Young Jean Lee, in which the playwright talks about her father dying…of lung cancer? 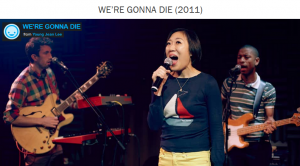 With her band, Future Wife, playwright Young Jean Lee takes the stage at Lincoln Center’s LCT3 in a life-affirming show that anyone could perform, about the thing everyone has in common: WE’RE GONNA DIE. You may be miserable, but you won’t be alone.

A study from the University of Limerick sheds some light on why sad songs make us happy.

In this week’s episode we’ll hear the sad songs that get Laura and Annabelle weepy–in a good way–and a listener tells us why Edelweiss is her go-to sad song.

We received lots of responses from listeners on Twitter, and since we don’t have time to squeeze them all into a 15 minute show, we created a Spotify playlist with everyone’s favorites: 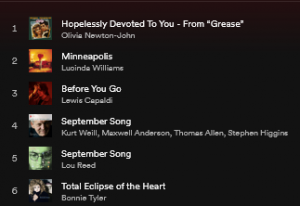 Liked Sad Songs That Help a Little…Not a Lot? Listen to these next...