Jordan, a lifelong comic book fan, and his friend Charles were discussing the DC comics villain Mr. Mxyzptlk and made a wager: if Jordan’s friends could trick him into saying his own name backwards, he’d owe them five dollars. Charles says the group succeeded using Jordan’s middle name — but Jordan refuses to pay up, saying the middle name doesn’t count. Who is right, and what’s in a name, anyway?

From Charles:
Exhibit A: One of the ways in which they planted the idea of saying Salgood was instituting it as a meme at their radio station – see attached photo of “Salgood” graffiti. 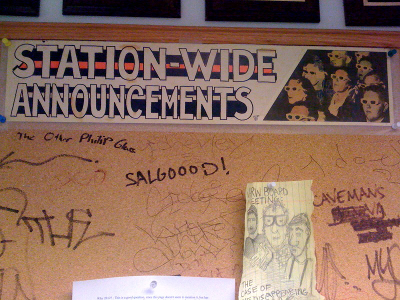 Exhibit B: “The station ID recording we made with our friend Nick where Jordan’s voice is reversed as he says his name.”