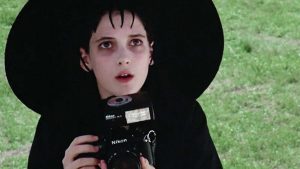 It’s showtime! This week’s co-host is Chelsea Stardust, director of the horror comedy Satanic Panic, along with All That We Destroy, which was part of Blumhouse’s Into the Dark series on Hulu. The character that made her feel seen? Fellow goth only-child Lydia Deetz of Beetlejuice, of course.

Long before she was a rising star in horror cinema, Chelsea was a Midwestern kid with a love for the strange and unusual. The first time she saw Beetlejuice, she recognized herself in young Lydia Deetz, from her dark sensibilities to her love of photography. In This week, Chelsea tells Jordan what she learned by embracing her inner Lydia.

Plus (speaking of Showtime): How is Jordan feeling now that Season One of Yellowjackets is in the books? Satisfied? Bereft? Reeling? Well stay tuned and she’ll tell you!

With Jordan Crucchiola and Chelsea Stardust

Liked Director Chelsea Stardust on ‘Beetlejuice’? Listen to these next...