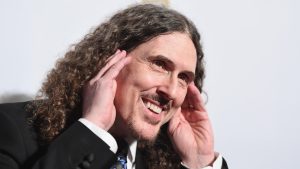 “Weird Al” Yankovic is the undisputed king of parody music. He’s been recording music for over 40 years and sold millions of records. He’s got an iconic voice, the chops for pop and a sense of humor that’s both distinct and approachable.

After all this time, Weird Al is getting the biopic treatment. Weird: The Al Yankovic Story was co-written by Al himself and debuts on the Roku channel on Friday, November 4th.

True to the biopic genre: Weird chronicles Al’s life from childhood to present day. But unlike most biopics, it is not probing, emotional and dark. It is not grounded or not realistic and there are no facades to be lifted.

What Weird Al does to popular music, he does here to biopics. It’s a very funny, joke-a-minute parody. The film stars Daniel Radcliffe as Weird Al, and Evan Rachel Wood as Madonna who’s Al’s main love interest in the film.

“Weird Al” Yankovic joins Bullseye to talk about Weird and the creation process behind the film. He also talks about how he got into making music and learning to play the accordion at a young age. Plus, he tells us about the time he decided he could make a living out of recording parody songs about food.

Liked “Weird Al” Yankovic? Listen to these next...