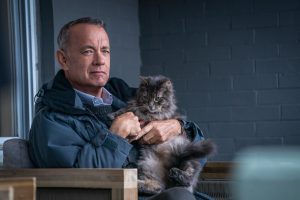 Tom Hanks is an actor that needs no introduction. He made his film debut in the 80’s and has since cemented himself as a cultural icon. Films like Castaway and Forrest Gump have earned Hanks many accolades. His two consecutive Academy Award wins and many nominations speak for themselves. But, his films have done so much more. They’ve transformed pop culture – earning him the Presidential Medal of Freedom in 2016.

Nicknamed “America’s dad,” Hanks’ appeal goes beyond his appearance onscreen. Charisma comes naturally for Tom Hanks. He’s always been affable, outgoing, and he attributes this skill to his somewhat transient childhood. Hanks’ parents divorced when he was just four years old, and he, along with his two older siblings, moved in with their father. Over the course of his childhood, he attended 10 different schools. But, he always found a way to ingratiate himself with those around him. Building that outgoing and friendly personality was crucial to his success as an actor.

Hanks started as a comedy actor but has won dozens of awards for his work in drama. The transition from certified funny guy to serious actor was a daunting task to consider. Although, Hanks frames it as relief at times. In comedy, he had to be the funniest guy in the room. But, affable isn’t all he is. Hanks is complex, serious, and has problems just like the rest of us do. It took him changing careers – becoming a writer, specifically – to get comfortable with that idea. There’s also parenthood to consider.

His newest film, A Man Called Otto, is a perfect addition to Hanks’ outstanding career as a writer and actor. It’s a story about growth. Hanks plays Otto Anderson, the title character in the film. He’s charitably “grouchy.” But there’s a reason. When the movie begins, Otto is mourning the loss of his wife, Sonya. He’s not sure how he’ll move on with his life until a new family moves into the neighborhood with their two daughters: Marisol and Tommy. The film explores Otto’s budding relationship with his neighbors – a friendship that becomes a life changing experience.

A Man Called Otto is now playing in theaters everywhere.

Liked Tom Hanks? Listen to these next...