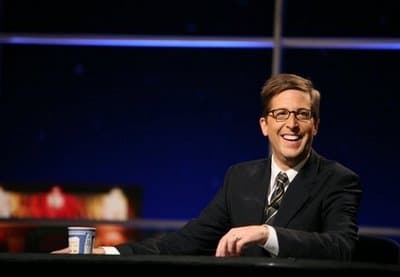 Spike Feresten wrote for most of the funniest television series of the 1990s, including Seinfeld, The Late Show with David Letterman, Saturday Night Live, and even an episode of The Simpsons. Even some of his failures — like The Dana Carvey Show — were beloved. Among his credits are the classic “Seinfeld” episode “The Soup Nazi.”

Three years ago, he stepped in front of the camera as the host of Fox’s late night series Talkshow with Spike Feresten. It’s a comedy-heavy Saturday night talk show that has featured guests ranging from Tim & Eric to Tom Hanks. The show just got extended from half an hour to an hour, airing in the slot that once belonged to Mad TV.

Listen to This Week’s Show Online

Discuss this episode on the forum!
Subscribe in iTunes
Please Donate to Support the Show

If you enjoyed this show, try these:
Rob Corddry
The Writers of The Late Show
Janeane Garofalo