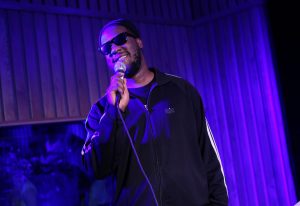 Robert Glasper is a Grammy award-winning pianist, producer and songwriter. He’s worked with some of the biggest names in hip-hop from Kanye West to Common.

Kendrick Lamar’s To Pimp a Butterfly features some of his outstanding keyboard work. He’s also collaborated with artists like Herbie Hancock, Kaytranda, and the late J Dilla.

To date, he’s earned three grammy awards and is up for another two this year – best R&B song for Better Than I Imagined, and best R&B Album for, F–k Yo Feelings.

We’re revisiting our conversation from 2012. At the time he’d just released one of his most acclaimed albums to date: Black Radio.

Black Radio is a record that blends jazz, R&B and hip-hop in an elegant, effortless way. It features guest vocals from Erykah Badu, Yasiin Bey, and Bilal.

Robert Glasper reflects on his longtime friendship and most memorable collaborations with Bilal. He also dives into the evolution of jazz , and how he sees himself in that world. And if you’ve ever wondered what it’s like to party with Ludacris in Atlanta – he has the answer.

Liked Robert Glasper, Grammy-winning R&B artist? Listen to these next...