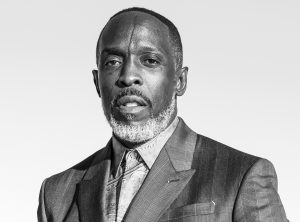 We’re remembering the life of actor Michael K. Williams, who died earlier this month. He was 54 years old.

He was best known for playing Omar Little on The Wire. Omar was a stick-up man. He lived both outside the law and under the constant threat of retaliation from the drug dealers he robbed. He took his grandma to church. Was deeply in love with his boyfriend Brandon. An iconic David Simon character.

Michael began his career in entertainment first as a dancer in New York, then an actor with a handful of walk-on credits. By the time he auditioned for The Wire he was in his mid-30s. He’d lived a whole life.

Williams went on to more roles. He played Chalky White on Boardwalk Empire. Most recently, his vulnerable portrayal of Montrose Freeman in Lovecraft Country, earned him his fifth Emmy nomination.

When Jesse Thorn talked with him in 2016, he was starring in a show called Hap and Leonard. He played Leonard, a Vietnam vet turned Private Investigator. The show aired for 3 seasons on the Sundance Channel.

When we heard the news about Williams’ passing, we went into the archives to listen back to our conversation. There’s some stuff you might’ve heard in the past, a lot of stuff you haven’t.

In this conversation, Michael talked about his memories of being a New York club kid, the difference that playing Omar made in his life, and the gig that made him realize that being a performer could be a career.

If you or someone you know is suffering from addiction, you can get referrals to local treatment centers and other support services by calling Substance Abuse and Mental Health Service‘s national helpline. Their number is 1-800-662-HELP. It’s free. It’s available 24 hours a day, 7 days a week.

If you’re experiencing a crisis of any kind and just need to talk with someone, you can text the number 741741 to reach a crisis counselor. 24 hours a day, 7 days a week. Completely free.

There is help available, and it’s never too late.

Liked Remembering Michael K. Williams? Listen to these next...