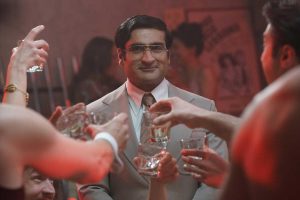 On the latest episode of Bullseye, we welcome back Kumail Nanjiani. The stand-up comedian has come a long way since he’s joined us over the years.

He got his big break as an actor in 2014, when he starred on the hit show Silicon Valley. Kumail played Dinesh. Kumail’s the star and co-creator of the Academy Award nominated movie The Big Sick.

He’s acted on TV shows like Portlandia and Veep, too. Recently, he got buff for a role as a superhero in Marvel’s Eternals.

And his acting resume just continues to grow. These days, he’s starring in the true crime drama Welcome to Chippendales on Hulu. The show involves the Chippendales dancers. Those hunks from the ’80s who wear bowties and do alluring dancing.

The limited series is about two men behind the scenes. Two men who created the concept, expanded the business, argued and plotted against one another until things ended in tragedy.

One is Nick De Noia, a choreographer with a background on Broadway. He’s played by Murray Bartlet of White Lotus. The other is Somen Banerjee, or Steve, as he’s known. He’s played by Kumail.

Kumail joins us to talk all about Welcome to Chippendales. Plus, why he got super yolked, what he gets from working out. He also gets into some of his biggest fears about show business.

All episodes of Welcome To Chippendales are available to stream on Hulu.

Liked Kumail Nanjiani on ‘Welcome to Chippendales’ and more? Listen to these next...