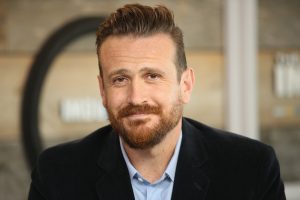 Jason Segel on AMC’s Dispatches from Elsewhere
Jason Segel has had a lot of interesting roles over the years. He’s usually the best friend type, maybe a little corny – always very endearing.

He got his start on screen in his late teens. He starred alongside James Franco and Seth Rogan on the short-lived cult tv show Freaks and Geeks. Jason played Nick Andopolis, a charming slacker from a Michigan suburb with dreams of being a rock star. From there he starred in a bunch of other comedic roles including: How I Met Your Mother, Knocked Up, and Bad Teacher.

He’s also a really talented writer. He wrote and revived the The Muppets for a new generation. His first writing gig was the feature film Forgetting Sarah Marshall. He also starred in the film. It’s sort of a romantic comedy. In it, he portrayed struggling musician Peter Bretter. The film starts with a breakup, and ends with a musical about Dracula.

His latest show is kind of a departure from all that, and he’s really proud of it.

AMC’s Dispatches from Elsewhere follows the lives of a group of regular people who discover a hidden world. It’s mysterious and strange. It’s earnest and heartfelt. Kinda silly, too. Jason is the show’s creator and star of the series. The show also features performances from Sally Field, Richard E. Grant, Andre Benjamin, and Eve Lindley.

We’ll talk with Jason about how he works humor into the tone of a show like Dispatches from Elsewhere. He also chats about the cast and what they’ve brought to the show’s creative process. Plus, plenty of chat about Freak and Geeks and what makes the Dracula song in Forgetting Sarah Marshall work.

Liked Jason Segel? Listen to these next...