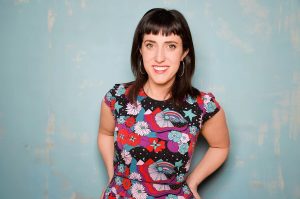 Her debut, Glass Gutter, was one of our favorite albums from the last few years. She’s followed that album up with an Audible Original series called Dirtbag Anthropology.

It’s a deeply personal series where Kate talks plainly about her life story: losing partners to divorce, to death, about what it’s like to be a queer comic. It’s equal parts memoir, exploration of masculinity and comedy record. It features interviews with folks like Margaret Cho, W. Kamau Bell, and her own father.

When we asked Kate about the craziest day in her entire career she shared a story about a friend she met in grade school. They had lost touch over the years, but one day she was performing stand-up and an audience member recognized her. Things only got stranger after that.

Kate Willett’s Audible Original, Dirtbag Anthropology is available now. She’s also the co-hosts of the political comedy podcast Reply Guys, which you can check out wherever you get podcasts.

Liked Comedian Kate Willett on the Craziest Day of her Entire Career? Listen to these next...