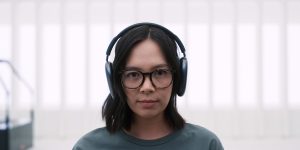 Charlotte Nicdao stars on the Apple TV+ comedy Mythic Quest. It’s a show about a video game company, but it’s not really about video games. It’s a workplace comedy, but think less The Office, more The Larry Sanders Show. Everyone on the show cares deeply about the thing they’re working on. It’s the massive online role-playing fantasy video game Mythic Quest.

Along with caring deeply about the game, everyone on the show also suffers from crippling insecurity. There’s Ian who’s played by Rob Mcelhenney of It’s Always Sunny in Philadelphia. Ian is the founder and creator of Mythic Quest. He wears a lot of rings, bracelets and has a very expensive looking haircut. In other words, he looks like a nerd who struck it rich, which he is. But he also worries that Mythic Quest is the only good idea he’ll ever have.

And then there’s Poppy, who’s played by Charlotte Nicdao. If Ian is a natural born leader who fears he can’t lead, Poppy is the opposite. She’s a talented engineer with a million great ideas who struggles with relating to people, and constantly gets in her own way.

Charlotte Nicdao joins Bullseye to talk about the new season of Mythic Quest and playing the part of Poppy on the series. She also talks about growing up in Australia, and the first time she visited the United States when she was a teenager for music camp. She also takes us back to the time she auditioned for the part of a mob boss in her school’s production of Guys and Dolls.

Liked Charlotte Nicdao of Mythic Quest? Listen to these next...