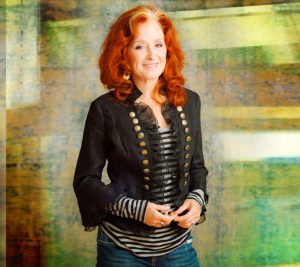 The 1970s were a golden age for the record industry. LPs were flying off the racks. Labels were signing acts, polishing them up and turning them into piles of cash. It was a machine.

Bonnie Raitt got her first record deal back then with Warner Bros. She was barely old enough to drink at the time. She knew exactly what she wanted when she first talked to executives.

“Don’t ever tell me what to record or with whom. Or how often to record or what to look like,” Bonnie says. “I’m not a singles artist, and I don’t want to be a star – and they still signed me. That was incredible.”

Bonnie still does things on her own terms, and she’s a legend for it.

Now in her 70’s she’s still touring, still shredding and still writing songs.  She’s been recording music for over 50 years and she’s won ten Grammys. Bonnie’s also been in the rock and roll hall of fame for over two decades.

Earlier this year she released Just Like That. Her eighteenth full length studio album.

Our correspondent Ray Suarez talked with Bonnie about the new album. She gets into coming into her own as an artist, playing through the pandemic and getting back on the road. Plus, she’ll talk about her longtime friend and collaborator John Prine, and what it was like performing his music after his death in 2020.

Bonnie is on the road now, check out her tour dates here.

Ray is hosting a podcast: The Things I Thought About When My Body Was Trying to Kill Me.

Liked Bonnie Raitt? Listen to these next...