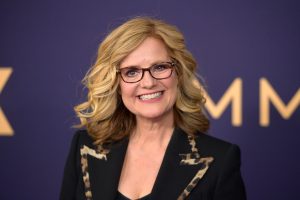 Bonnie Hunt has done it all and she is extremely good at what she does. She’s a comedian, an actor, a TV host, a writer and a director.

Her first ever part was in Rain Man, and since then she’s starred in Jumanji (1995), Jerry Maguire, Cheaper By The Dozen, and a bunch of Pixar movies too. Bonnie also starred in three sitcoms in the 90s and in the early 2000s, she hosted the brilliant, underrated talk show, The Bonnie Hunt Show.

Bonnie has also created several hit TV shows and directed movies. Her latest endeavor is a family TV series called Amber Brown, which is now streaming on Apple TV Plus. It’s based on the Paula Danziger book of the same name.

It’s a show about a middle school aged kid named Amber living with her mom. Her parents are split up, and when the show begins her dad lives overseas. Amber’s world gets turned upside down pretty quickly when her mom starts dating some guy named Max, her dad moves back, and her best friend is heading out of state. It’s a lot, but she has a lot of ways to help cope such as creating a video diary, drawing and even talking with her cool aunt.

Bonnie Hunt joins Bullseye to talk about the new show and why she thought it was important to make an understated kid’s series. She also talks about how she discovered improv in Chicago, and how she managed to combine it with her day job as a nurse. Plus, she talks about The Bonnie Hunt Show and what made it such a unique talk show.

Liked Bonnie Hunt? Listen to these next...