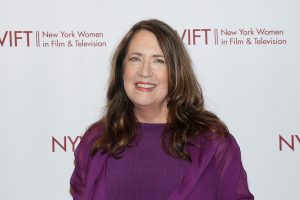 Ann Dowd is a veteran actor. Her career began on the stage, first in Chicago, where she went to school, then in New York. She started appearing on screen in the ’90s. One of her first gigs included a part in the original run of TV’s The Baby-Sitter’s Club. She also appeared in nine different episodes within the Law & Order franchise.

As she has continued her acting journey, she has starred in many memorable parts in shows like Search Party and the HBO series The Leftovers, which earned her two Emmy nominations. She has also appeared in several films including Garden State, The Informant!, Hereditary, and received critical acclaim for her performance in the 2012 thriller Compliance.

Ann Dowd is probably best known for her part in The Handmaid’s Tale, which is back for a fourth season on Hulu. She plays Aunt Lydia in the show, a cruel, sadistic, but sometimes motherly villain who presides over the handmaids. In 2017, she won an Emmy Award for her exceptional performance in the role. The series also stars Elizabeth Moss, Bradley Whitford, and Samira Wiley.

Ann Dowd joins guest host Linda Holmes of NPR’s Pop Culture Happy Hour to chat about the relationship she’s developed with the character she’s played for four seasons on The Handmaid’s Tale, similarities between some of the different roles she’s played, and when she made the switch from studying medicine in school to studying acting. Plus, she’ll talk a little bit about her new film “Mass” which premiered at the 2021 Sundance Film Festival.

Liked Ann Dowd? Listen to these next...