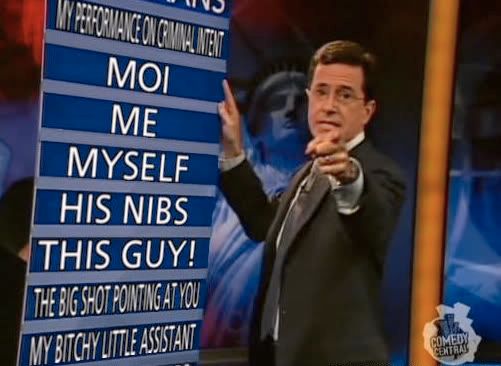 For the first two seasons of Cartoon Network’s “The Venture Bros.”, the character of Professor Impossible was voiced by Stephen Colbert. The show’s putting together its third season now, and show co-creator (and past TSOYA guest) Jackson Publick tried to get in touch with Colbert, who is now famous. After bouncing from manager to agent to assistant to assistant, he got this snide reply:

“Stephen has neither the time nor the interest in participating in your project.”

James Urbaniak, one of the show’s stars, had this to say:

As my wife noted, it’s an open question why the assistant who wrote that email didn’t add the word “little” before the word “project.” (One also wonders if Mr. Colbert’s lack of interest in the show applies retroactively to the two seasons he’s already recorded. The assistant fails to clarify.) Ah well. Such are the consequences of Mr. Colbert’s much deserved success. I realize that the person who wrote the email was probably not quoting Mr. Colbert directly and may very likely have had no idea what The Venture Brothers is. Nevertheless (and no one’s unhappier about this than I am) I am left with no choice but to put Mr. Colbert on his own board. Guess what, Prof. Impossible-For-Me-To-Do-Any-More-Cartoons? You’re on notice!

I mean really… “the interest?” He did do it for the last two seasons. Sheesh. It’s complicated to be famous, and it’s hard to find good help these days, but this gets a big thumbs down from me.